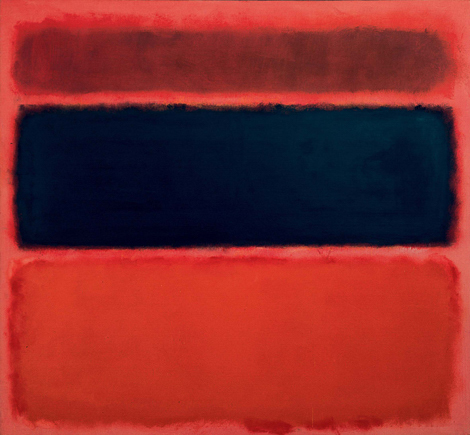 Mark Rothko, No. 36 (Black Stripe), 1958, from the collection of the Museum Frieder Burda in Baden-Baden.

Last year I was invited to view a controversial painting that the owner claimed to be a genuine Rothko he bought at a small LA auction many years ago. The painting was not officially included in the Rothko catalogue raisonné despite the fact that the owner discovered photos in the Rothko archive which seemed to prove its authenticity as an early work; his attempts to persuade the catalog’s author, David Anfam, were in vain. Rothko is a favorite artist and I’ve seen many of his works over the years at art museums and Rothko retrospectives, but it was difficult for me be sure that this painting was authentic. To my eyes it looked like a Rothko, but without inclusion in the Rothko catalog, it was not authenticated. Perhaps in the past it would have been possible to find an appraiser who would go out on limb, but today’s art world makes it more difficult to take a chance.

Lawsuits have been filed against artistic charitable foundations, art appraisers, authors of art catalogs and other art professionals over their opinions concerning authenticity of artworks. The lawsuits have been based on claims against authenticators for breach of contract, product disparagement, professional negligence, defamation and restraint of trade.

The stakes are high. The Rothko in question that I viewed could fetch $20 million or more at auction, if proved authentic. The omission of the alleged Rothko from the catalogue raisonné rendered the work virtually unsalable. One reason for the reliance on the Rothko catalogue raisonné was a 2014 Anfam opinion validating a Rothko, which was then promptly sold at Christie’s for over $33 million.

Art authenticators are increasingly finding themselves in some dicey situations. Several years ago, a scholar who was working on the Modigliani catalog ceased his work after receiving death threats over his judgments.

There may be a good reason for the sensitivity as to the genuineness of Rothko works. Art forgery is a major problem in today’s hyper-inflated art market. A notorious scandal at one of New York City’s most prestigious galleries involved forged art, including Rothkos and Jackson Pollocks, sold for millions of dollars. In the scandal’s wake, the 165-year-old Knoedler Gallery closed its doors in 2011 and a criminal investigation was launched against an associated art dealer.

A considerable number of art foundations shut down their authentication boards in recent years. The problem became very public when multiple lawsuits forced the Warhol Foundation, one of the richest and most prestigious artistic foundations, to abandon art authentication services in 2012, after shelling out millions in legal fees (one suit alone cost the foundation $6 million in fees) to defend lawsuits over decisions not to validate certain alleged Warhols that would have reaped big money with the Warhol imprimatur. Warhol is notoriously difficult to authenticate and there is a belief, which may be well-founded, that the art world is rife with Warhol fakes.

Many other artistic foundations have ceased authenticating works, including the Keith Haring Foundation, which discontinued authentication of work in 2012, after being sued by a group of collectors for alleged losses of $40 million on the opinion that their paintings were forgeries. Other boards which closed include Pollock-Krasner, Picasso and Basquiat (also embroiled in an authenticity lawsuit). Despite the fact that almost all of the lawsuits filed against authentication boards have been decided in the boards’ favor, the legal fees and public controversy proved to be too much for these foundations. Former Los Angeles City Councilman Joel Wachs, longtime president of the Warhol Foundation, stated that “Eventually we decided that we wanted our money to go to artists and not to lawyers.”

The cascade of litigation has put a chill on the practice of art verification at a time of great reliance on art professionals’ opinions. New York’s state legislature has taken notice of the authentication crisis. In June, the New York State Senate passed a bill backed by art institutions and appraisers that would provide some protection for them in lawsuits. The bill would require anyone bringing a lawsuit against an authenticator to prove the case by a standard of “clear and convincing evidence.” This is a much higher bar for a plaintiff than the usual standard of proving a civil case by a “preponderance of evidence”—i.e., anything more than 50%. In addition, an unsuccessful claimant would be responsible for paying the other party’s attorney’s fees. The bill’s definition of “authenticator” is broad enough to include authentication boards, appraisers, and authors of art catalogs.

If passed by the Assembly next year and signed by governor, the bill would effectively eliminate the filing of all but the most egregious claims against authenticators in New York. I believe this proposed law is overkill. The overwhelming record of failure to prevail by owners of unauthenticated artwork should suffice to diminish the appetite of plaintiffs’ lawyers for these suits. In addition, I do not believe it is prudent for artistic foundations to be in the authentication business. The main mission of these charitable foundations should be to promote the legacy of the artist, educate the public about the artist, and to make grants for artistic exhibitions—not to validate artwork.

Forgery will always dog the art world, but some scientific relief may be on the way. The New York Times recently reported that implanting “synthetic DNA” unique to each individual artist could be encrypted at the molecular level into each individual artwork and could be read from a scanner to authenticate the work. The creators of the system claim it would be virtually impossible to remove the DNA signature once incorporated. Perhaps the work of art authenticators will eventually go the way of taxi drivers in this brave new digital world.