In the past two years two art museums endowed by Los Angeles billionaires have opened. Eli Broad opened The Broad museum in 2015 and the owners of Guess Jeans, the Marciano Brothers, opened the Marciano Art Foundation in May of this year. While this is a huge boost to the contemporary art profile of Los Angeles, museumgoers should be aware that there’s more to this than the altruistic instincts of the Broads and the Marcianos. These institutions were set up as nonprofit artistic foundations which were designed to shelter their founders from estate, capital gains, and sales taxes on the art, stocks and bonds they donate to or acquire for their foundations. That said, there is little doubt that these two new institutions serve an artistic and educational purpose for the public good and are worthy endeavors. 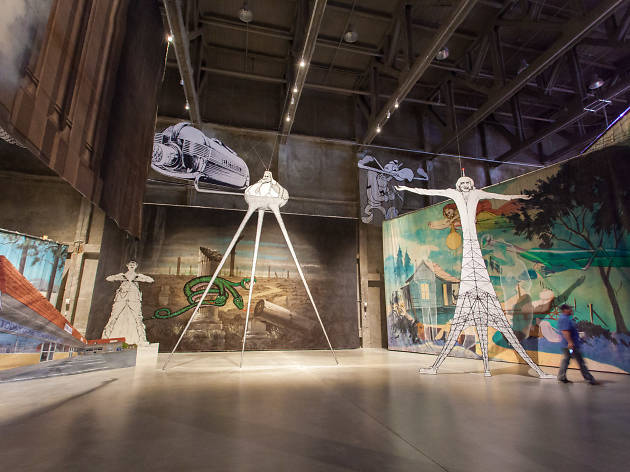 A recent visit to the Marciano museum in Hancock Park was quite a treat—crowds were sparse (advance reservations are required) and the art, focused on works created in the past 20 years, was nicely displayed in the wonderful 1960s Millard Sheets-designed former Masonic Temple on Wilshire. The Marcianos left much of the bones of the building untouched, including the terrific first-floor-atrium lobby. The massive auditorium has been stripped down and given over to LA artist Jim Shaw who did wonders with the Masonic wigs and stage backdrops left behind.

The Marciano collection displays no more than 100 out of the 1,500 works of art estimated to be in the collection. Likewise The Broad museum, differing from the Marciano in displaying contemporary art dating back as far as the 1950s, also shows only a fraction of its collection. In fact you can get a glimpse of the storage facility in the bowels of The Broad when you climb up or down the staircase. There is nothing in the tax regulations indicating if all works of art, or any, ever have to be exhibited. Hopefully, foundation museums will not become tax-sheltered storage facilities for art collectors. 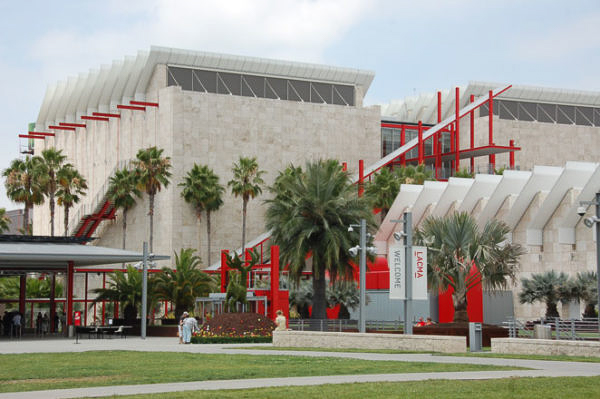 Exterior of BCAM at LACMA.

Eli Broad donated $56 million for a new building at LACMA bearing his name (known as BCAM) that opened in 2008 and expected at the time to house most of his 2,000-plus-piece collection. A considerable number of pieces from his collection were shown there until his museum opened in downtown Los Angeles. Broad said at the time that he was concerned that LACMA would display only 10 percent of his collection and the rest would be put in storage. Hopefully, the public will eventually get to see more of Broad’s collection at his downtown museum (A recent show, “Oracle,” is a promising start).

Concerns have been voiced about the proliferation of family foundations running small “museums” on their own estates. The New York Times Magazine raised eyebrows in a 2015 article focused on Peter M. Brant, the socialite newsprint mogul and publisher of Art in America, who opened an art museum (substantially smaller than some new LA galleries such as Hauser & Wirth) in an historic refurbished stone barn on his Greenwich, Connecticut estate. There were no identifying signs to indicate that an art museum existed on the property.The Brants can literally eat dinner at home, and then walk a few steps and have dessert in their art barn while enjoying a tax exemption for any art donated to their semi-private museum! It’s questionable whether the tax benefits enjoyed by the Brants are worth the art enlightenment bestowed on the small group of patrons who might visit this museum. However, the Brant Museum has recently expanded its profile with a substantial website and runs a lecture series with big-name guests from the art world.

There may now be more than 40 family art foundation museums operating in the U.S. While those operating on the scale of The Broad provide a public benefit, there are real questions about some of the smaller more private “museums.” Current federal tax regulations allow art foundations to be established without opening them to the public, as long as they are pursuing charitable purposes such as loaning art, making grants and making their archives and works available for research. This works well for fine artists, hundreds of whom have set up charitable foundations for the art they own, but should this regulation also apply to family art collections? If art collectors set up an art foundation, it seems only fair that it should be open to public view to justify their tax breaks.

The biggest problem of all may be that, if the proliferation of tax-exempt family art foundation museums continues, they may deprive public art institutions such as LACMA and MOCA from receiving art donations they would otherwise have received, and instead, ironically, force these public museums to compete with these family foundations to expand their holdings and maintain the broader public’s exposure to important art.