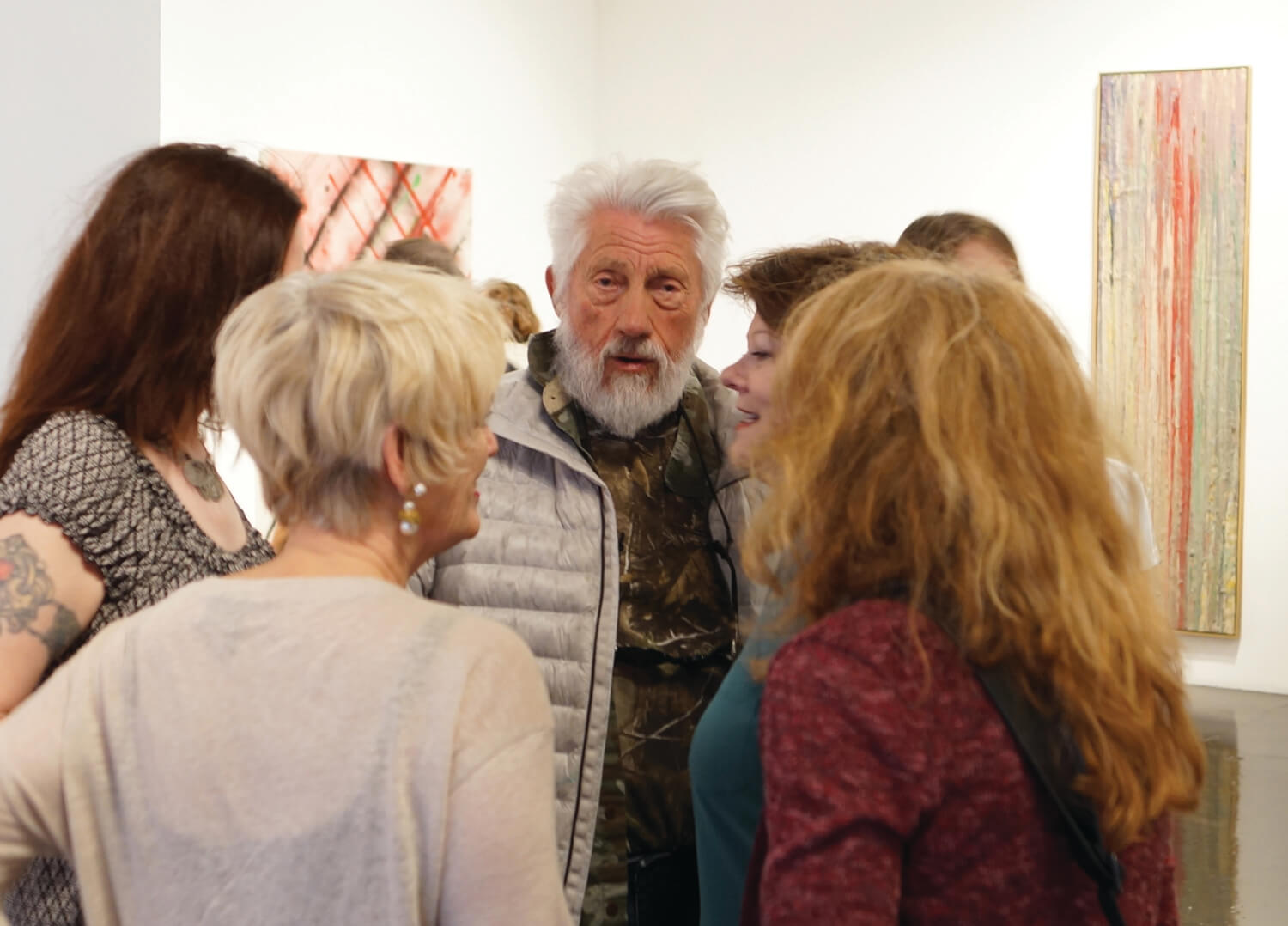 Last Tuesday night (January 16, 2018), a day before he died, Ed Moses had an art opening of his latest work at a gallery space next to the new Hal’s restaurant in Playa Vista (where you can see a remarkable installation of his painted sliding door screens). Ed wasn’t at the reception which was unusual, and when I spoke with his son Andy I could tell without much explanation that the end was near. I thought Ed would never die—even into his 90s he was a force of nature. I visited his studio several times in the last few months and found him working on canvases even while confined to a wheel chair. He painted every day—painting was for him like breathing—a life force. He painted outdoors in natural light wearing a big floppy hat and paint-spattered clothes with the tarmac between his house and his studio bearing years of war paint—battle scars of Ed’s mark making.

Ed was a giant of Abstract Expressionism—could there be anyone who enjoyed making abstract art more? Ed was present at the creation of the New York School of artists hanging out at the legendary Cedar Tavern in Greenwich Village with the likes of Franz Kline and Willem de Kooning in the late 1950s. Upon his return to LA, he became a member of the so-called “Cool School”—the boys of the 1960s Ferus Gallery including Ken Price, Craig Kauffman, John Altoon, Billy Al Bengston, Ed Ruscha, Robert Irwin, and Larry Bell. Architect Frank Gehry was a lifelong friend who credits Ed with freeing him up to wild experimentation. 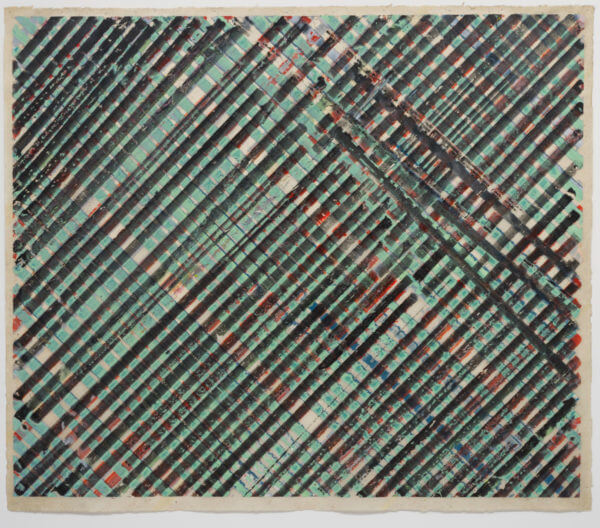 Ed was an artistic genius whose process morphed and evolved from day to day. I was mesmerized when I interviewed him for Artillery in May of 2015 on the occasion of his superb drawing retrospective at LACMA. Even though I had been his friend and lawyer for years, he unraveled some of the mysteries behind his art. Having studied Buddhism, he was always searching for transcendence and the magic that was in the discovery of some new direction — some new process of abstraction. The drawing show focused on the paradigm of the grid which Ed perfected in the 1970s and returned to periodically during all the years he painted. He told me he would go back to the grid when he got stuck — when his work wasn’t evolving. I finally understood – the grid helped him tame the chaos one could perceive in the shear infinity of abstraction. Step aside Mondrian – Ed Moses owns the grid. 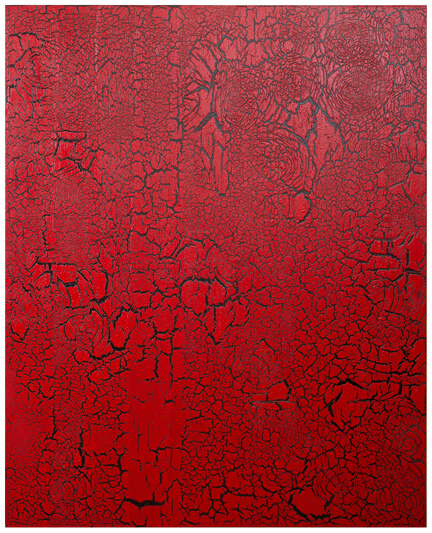 But there was so much more. In the last few years Ed claimed to have invented the craquelure process of painting. While that may be an exaggeration, he certainly perfected it. He used what he called “secret sauce” and invented a process (I know the secrets, but it’s attorney-client privileged, so don’t ask) to crack the paint into a thousand fissures. 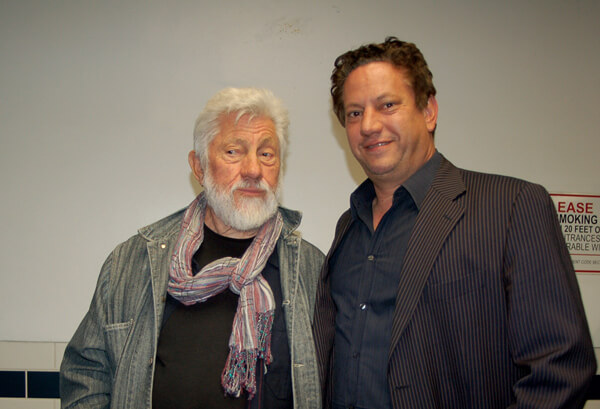 Ed also made a huge mark on the world. The ying to Ed’s yang was his beloved Avilda, the calm in Ed’s storm whom he re-married a few years ago, although they were never far apart having shared Andy and Cedd and their wives Kelly and Pamela and his two grandkids. Then there’s his artistic progeny, including several successful abstract artists who were at various times his studio assistants and friends and, of course, Andy and Kelly who are both terrific artists in their own right. 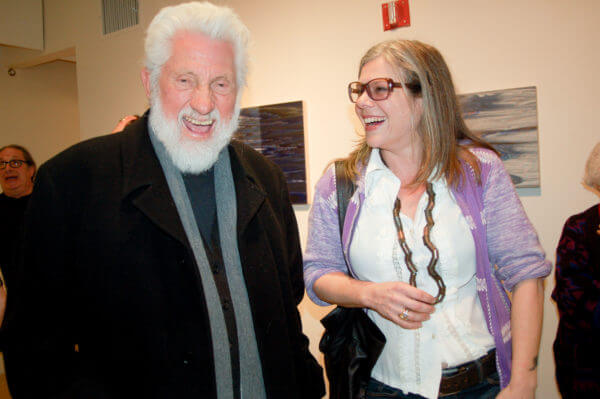 Everyone in the art world knows how cantankerous Ed could be. I’ll let others tell those tales, but I prefer the older mellower Ed who started to see the light at the end of the tunnel. If there’s an afterlife, he’s painting it right now.