Graffitist Scrawl New Rights For All

5pointz in its glory days

Whenever I mention the V.A.R.A to artists, I’m invariably met with a blank stare. The Visual Arts Rights Act, passed by Congress in 1990, grants artists a form of Droit Moral or moral rights, intended to protect artists’ control over the fate of their works. Moral rights have been preserved more effectively in Europe, which has a long history of granting artists protection. The V.A.R.A. provides that artists’ works of “recognized stature” whether or not still owned by the artists, cannot be altered or destroyed without 90 days notice to the artist, subject to certain exceptions. Artists are often asked to waive V.A.R.A. rights in written contracts, and they often do so without even knowing what rights they are giving up.

The 5Pointz complex in Long Island City (Queens), New York, was a mostly empty group of industrial buildings that had become, until 2013, a showplace for some of the city’s best graffiti artists to publicly display their works. Public opening exhibitions were held there by the artists and the site appeared in tourist guidebooks to NYC and was often used as a backdrop for video and fashion shoots.

The complex’s owner Jerry Wolkoff had tacitly allowed the artists to paint the exterior of the buildings until local real estate values increased enough for Wolkoff to consider redeveloping the site. Suddenly, Wolkoff ordered that the building exteriors be whitewashed in the middle of the night. That’s when a legal dispute began that took years to wind through federal court, culminating in a $6.7 million judgment in favor of dozens of graffiti artists in February this year. The case is considered a landmark decision since very few lawsuits under the act have actually gone to trial; it is believed to be the first time a jury awarded significant damages under the act.

One of the flaws in the V.A.R.A. is that the term “recognized stature” of the artwork has been left to a court’s discretion. The 5Pointz decision makes it clear that the term gives courts and juries wide latitude—even graffiti can be protected as “art” under the law despite the fact that some art critics still turn up their noses at graffiti art. (Angelenos may recall the uproar created at MOCA by Jeffrey Deitch’s controversial, but popular, “Art in the Streets” show in 2011.)

In the 5Pointz case opinion U.S. District Court Judge Frederic Block found that: “The cultural significance of 5Pointz and the value of the aerosol art created by the 21 plaintiffs has been recognized as fine art. It is now clear that the federal law protects the dignity of the artist and ensures that their artwork is treated respectfully.” Block also condemned the fact that Wolkoff acted abruptly to paint over the works without giving required prior notice to the artists, denying them any opportunity to try to preserve or to remove their work. 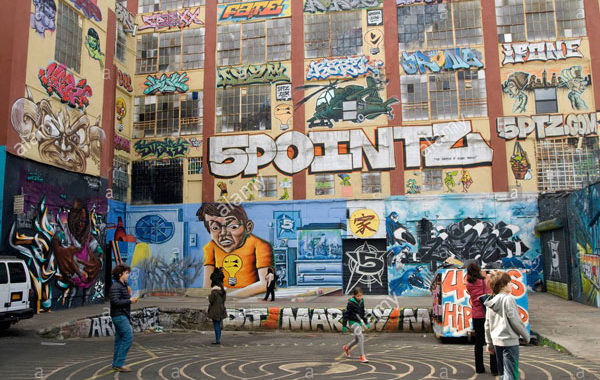 In the wake of the 5Pointz decision, lawyers who negotiate public or private commissions for artists will likely find that most contracts presented to them will contain waivers of the artist’s V.A.R.A. rights, but artists should consider the importance of resisting these waivers.

Another V.A.R.A. controversy erupted this spring in Palo Alto, Silicon Valley’s ground zero, where artist Adriana Varella objected to the city’s demand that her work, “Digital DNA,” be removed from public display. The eye-catching large egg-shaped sculpture composed of used computer parts had been displayed at a downtown plaza since 2005. The city wanted it removed due to increasing maintenance costs. The artist asserted her V.A.R.A. rights, claiming it had become a Valley landmark.

ARTnews reported in February, 2018 that the city said the fiberglass shell with multiple circuit boards screwed into it made it vulnerable to the elements and “not suited to the outdoor environment.” The city cited years-long efforts at preservation in conjunction with the artist that had failed to halt the deterioration of the piece. However, the Palo Alto Daily Post reported in April that the repair costs were merely $1,000 per year, a ridiculously small amount for one of the nation’s richest cities.

It does not look like the “Digital DNA” matter will end up in court since Varella announced in the Daily Post that she would be willing to sell the work for $250,000 and will restore it in 24-karat gold for $500,000—a mere pittance for a Silicon Valley billionaire, and a small token of what should go into public art in Stanford’s back yard and the birthplace of Apple.