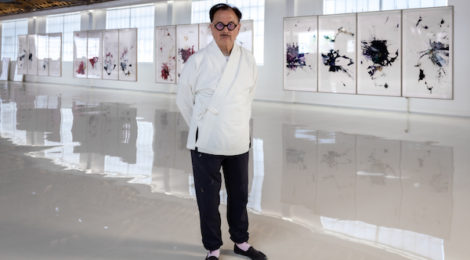 Before I interview Mr. Chow, he sets my copy of his book on fire. After smashing large Sharpies onto a blank page of the book in a riot of color (“green always goes well with red”), he pours flammable paint thinner on the page and calls for his “darlings” to bring him some Kleenex which he rubs onto the page (“I like having some dimensionality”) while his assistant hands him a blowtorch to set the page on fire. Just before it gets out of control, another assistant quickly douses the flames with a spray water bottle. He hands back my book and pronounces it a work of art.

A couple of weeks earlier, I’d attended a party at Jeffrey Deitch’s gallery near Hancock Park to mark the closing of his eye-popping neo-sculptural show, People. Urs Fischer had rendered a full-scale wax figure of Mr. Chow in his signature double-breasted suit and owl glasses, and when I spotted Chow, he was holding his head in his hands courtesy of Deitch, who periodically allowed the wicks at the top of the waxwork to be lit—Chow’s head had melted off at the neck. Chow had enough of the party and as I followed him out I said, “I’ve been told your latest art work is spectacular.” “It is!,” he said. “Come to the studio and see.” 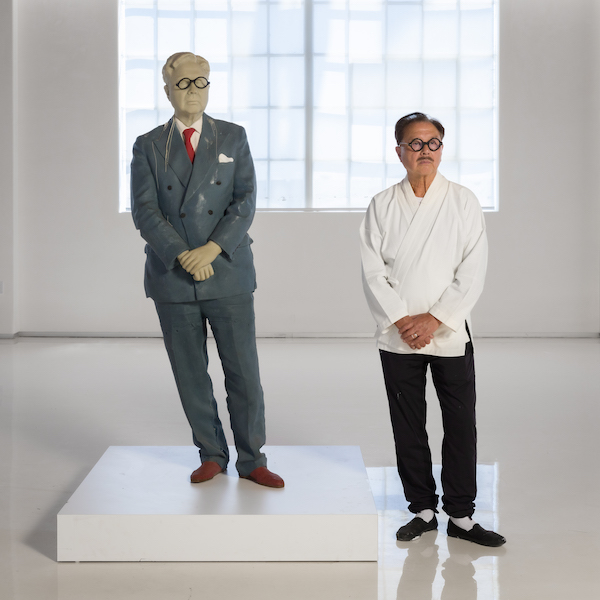 Michael Chow (referred to by friends as “M”), now 80, recently celebrated the 50th anniversary of his legendary eponymous restaurants known as Mr. Chow, but Chow is not serving Chinese food this afternoon. That much is clear. I’m in his enormous bow-and-truss art studio in the warehouse district of the city of Vernon, just outside DTLA, having survived a potential collision with the dozens of tractor-trailers and freight trains weaving in and out of the side streets. I’m hungry (our meeting was around noon), but he’s a man obsessed about creating art—no time for lunch.

Chow is wearing a surgical mask to protect himself against the paint fumes and tugs it down below his chin as we sit in front of his large abstract works, decorated with sheets of richly colored hardened house paint on canvas. He uses eggs to color the painting, and sometimes leaves the shells on the canvases. He also makes use of cellophane wrap, bubble wrap, coils of dried varnish and other surprises.

Chow left China in his teens and was educated at St. Martins School of Art in London. At the time he knew artists Peter Blake, David Hockney (a student at the Royal Academy of Art) and Howard Hodgkin. He pursued the life of an artist, but he says a “Chinaman” had no chance in those days and that it’s all “fucking different today.” “Now if you’re a gay, black, female artist, you’re set,” he says matter-of-factly. So he took a “fucking side trip” into the restaurant world and opened his Mr. Chows in London, New York, Beverly Hills and Miami. 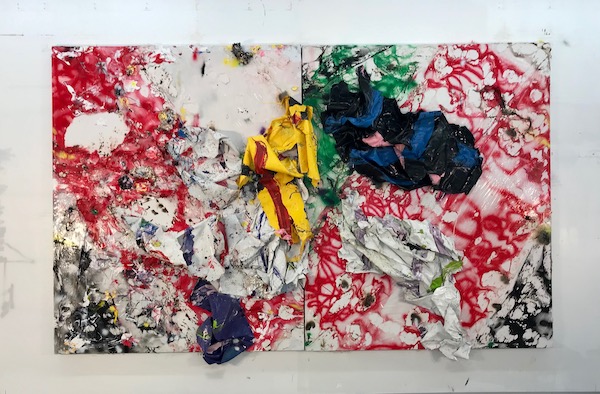 Chow tells me he painted a huge canvas titled “Four Seasons” in “four fucking seconds.” When I give him the fish-eye, he proudly explains that he punched a concentration of paint with a hammer to create a colorful splatter pattern that took only a second each for the four joined canvases.

When he realizes I haven’t read the two books his assistant just gave me, he dismisses me and tells me to return after I’ve done my homework. I figured there was no use trying to push it—he just wasn’t in the mood for an interview and really wanted to paint.

When I return about a month later, having read Chow’s books, his signed “art work,” Mr. Chow 50 Years (which reproduces art works of Mr. Chow and of his family made by Hockney, Ruscha, Warhol, Schnabel, Basquiat, Clemente, Haring, Scharf and Jonas Wood) and one about his father, Zhou Xingang, the longtime superstar of the pre-Cultural Revolution Peking Opera. Chow is more subdued than the manic version I’d encountered previously. But first he gives me a test: “Quick. Name the top five AbEx painters in order of importance.” I rattle off Willem de Kooning, Franz Kline, Mark Rothko, Clyfford Still and Barnett Newman.

But you left out number one—Jackson Pollock

“Not bad. But you left out number one—Jackson Pollock—and take Rothko out of the top five,” he says, allowing no room for my explanation. This makes sense since Chow clearly fits into the subcategory of action painting—there’s a lot of chance involved in the creation of his work. Pollock almost “singlehandedly shifted the focus of the art world from Europe to America,” he says.

In 1968 Chow opened Mr. Chow in London. He recalls swinging London in the ‘60s as “a British cultural revolution—The Beatles and Michael Caine had working-class accents and achieved instant prominence, unheard of before.”

It’s how you serve the fucking food

He attributes the restaurants’ success to integrating food with art and theater: “It’s how you serve the fucking food—the waiters’ body language must be like a dance. You have to transcend the restaurant experience. It’s like entertainment—making a show out of the waiters carving a duck, the chef twisting the noodles by hand, the wine steward rolling out the Champagne trolley.” His restaurants were “global melting pots” that had Chinese cooks and Italian waiters.

“The restaurant is like a musical,” he says, and he took it on the road. By 1980, the show reached New York City and Mr. Chow became a center of New York café society. But it also became a haven for the city’s artists, whose superstars included Chow’s friend Julian Schnabel, who “exploded onto the scene.” David Salle, Francesco Clemente, Andy Warhol and Jean-Michel Basquiat also hung out at Mr. Chow. The art crowd partied at the Palladium and Studio 54 where Chow was given a birthday party. Artists were making a lot of money and Chow encouraged them to spend it at his restaurant—Keith Haring pre-ordered 80 bottles of Cristal for his birthday party at Mr. Chow. By the early ‘90s the party was over—many of the ‘80s artists fell out of favor.

In the ‘90s Chow spent most of his time in Los Angeles, but he didn’t think much of the art scene, and so he spent the first decade of the new century in what he calls his “Tibet,” watching movies and playing poker.

In the last three or four years he has returned full circle to focus on his own art practice. He calls himself “a collagist.” “Collaging puts things together in harmony that weren’t supposed to go together, like oil and water. Collage is one of the most important art movements.”

He points out that many of his paintings are in 3D and are part sculpture. He says his innovations include the use of dried sheets of house paint and silver leaf that oxidizes into different metallic shades.

No form is a form allowing for spontaneity.

Chow seeks freedom in his art. “No form is a form allowing for spontaneity. In collage nature does the work for me.” Chow describes what he calls the “controlled accident,” as exemplified by his large work “Four Seasons.” When Chow brings up his burning technique I mention the work of contemporary Chinese artist Cai Guo-Qiang, who uses gunpowder explosions on his canvases. Chow says he’s a fan of Cai. “You can’t paint better than nature. There’s minimal execution – you let nature paint for you.” But he warns that it requires a lot of practice. He’s motivated by Kung Fu and his process comes from “Chinese spirit and energy.”

When I ask him how he was inspired to get back into art, he mentions encouragement from Julian Schnabel and Jeffrey Deitch “who rediscovered me.” He credits Deitch, Larry Gagosian (Chow hosts Gagosian’s February pre-Oscar parties at his Beverly Hills restaurant) and Hauser & Wirth for presenting “museum quality” shows in LA. As for a possible Los Angeles show of Chow’s works, he says that an exhibition will be forthcoming, but he declines to reveal where—although I’m told it will be at a major gallery.

Mr. Chow burned down the traditional Chinese restaurant and reinvented it and now he seems poised to set the art world on fire too.