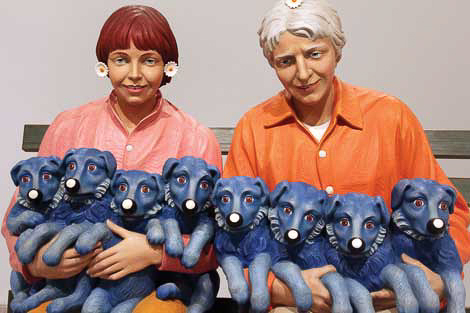 In September, while in New York, I popped into the Whitney to check out the occupation of the entire museum by Jeff Koons. While I’m not under the spell of what The New York Review of Books recently proclaimed “The Cult of Koons,” the “Banality” series of the 1980s is perhaps Koons’ most fully realized suite of work—a white porcelain Michael Jackson with his chimp, Bubbles, on his lap is a favorite. But one of the “Banality” works on display reminded me of an important court decision regarding artists’ appropriation of other artists’ work—a rendering of a man and a woman sitting on a bench holding eight puppies painted in deep blue. This ensemble image was not original to Koons, instead being lifted from a photograph that Art Rogers, a professional photographer, had licensed for sale on postcards (the original photo is in black and white). Koons bought a card, tore off the copyright notice, and sent it to a fabrication shop to make it into a glossy multicolored life-size wooden sculpture that was displayed at the legendary Sonnabend Gallery in New York in 1986. The edition of four known as “String of Puppies” brought in hundreds of thousands of dollars. At one point during the lawsuit Rogers filed against Koons for copyright infringement, Koons sniffed that the original photo “was not art,” but rather a common image worthy of parody, and proffered the defense of the “fair use” exception to infringement.

This lawsuit was one of many brought against Koons for infringement. Most were settled quietly out of court—after all, Koons is a big target. However, the puppy case, Rogers v. Koons (1992), and another copyright case, Blanch v. Koons (2006), are two of the leading cases on fair use as it applies to fine art. The puppy case was decided against Koons, but he prevailed in the Blanch case. In recent years, this area of the law has begun to turn judges into art critics.

In the Rogers case, Koons claimed that in the “Banality” series he created a parody based on the proliferation of common images in society. Never one for modesty, Koons argued that he considered himself as following in the footsteps of Marcel Duchamp who pioneered the use of what he called readymades, such as urinals (Koons’ readymades include vacuum cleaners). But the court rejected his parody argument, instead focusing on the fact that he destroyed Rogers’ copyright label and that he was most interested in commercial exploitation of the image, something Koons has never been shy about (he was a Wall Street hedge fund trader before finding his true calling). The court concluded that the photograph was duplicated almost in its entirety by Koons and that totality of copying is an important factor in the application of fair use.

One of the interesting things about these cases is that in his legal briefs and testimony Koons has expounded upon his doctrine of banality, explaining the meaning of his work as few artists have needed to, but I’m not sure he clarified his theories to anyone who was baffled by the significance of a massive heap of faux multicolored Play-Doh dumped in the middle of the Whitney’s top floor. But now I think I know. Could it be? Oh yes—banality!