There are plenty of deserts around the world. As President Trump memorably said when he abruptly pulled American troops out of Syria as a favor to the Turkish president Erdogan: “There’s a lot of sand there.” So why is it that Desert X, the organization that has put on two well-regarded biennial shows in the desert of the Coachella Valley, decided to agree to a special installation in the Saudi Arabian desert opening this month? Was the Sahara off limits, or is this all about a public relations campaign by the kingdom to greenwash its image after widespread condemnation of the grisly murder of Washington Post columnist Jamal Khashoggi? The funding for the installation comes from the Saudi monarchy.

The Desert X board of trustees’ decision to do an installation in AlUla, Saudi Arabia, at the UNESCO World Heritage site of the ancient city of Hegra led to the October, 2019 resignations of three board members, including artist Ed Ruscha and art historian/curator Yael Lipschutz. The chosen site is replete with ruins dating back to antiquity that few Westerners have seen, so it would seem to be an intriguing location. The Saudis are seeking to diversify their oil-based economy and see the show as part of an initiative to increase tourism.

Despite material modernizations in the feudal kingdom, it remains a tightly controlled monarchy ruled by Mohammed bin Salman (MBS). U.S. intelligence officials believe MBS personally ordered Khashoggi’s murder and dismemberment in its Istanbul consulate. Prior to the Khashoggi atrocity, in 2017, MBS showed the kingdom’s princes and billionaires who’s boss with the house arrest of dozens of the upper crust in the Riyadh Ritz Hotel for months—where they were terrorized and blackmailed into submission to MBS. There are virtually no human rights afforded in the kingdom and though women have finally been granted permission to drive, they are still subject to the whims of male family members. 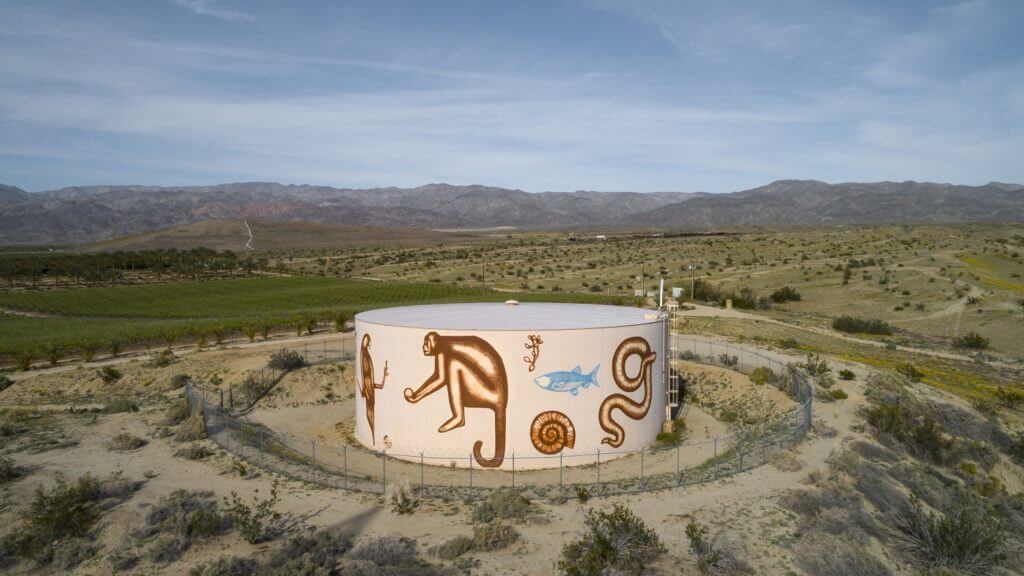 Apparently, MBS has some interest in the art world, as evidenced by his purchase of “Salvator Mundi,” a portrait of Christ attributed to Leonardo da Vinci, which shattered the world record for a painting sold at auction in 2017 when he paid Christie’s $450 million (the painting is reportedly secured on MBS’s super-yacht, despite the expectation that it would be loaned to the Louvre Abu Dhabi).

The suppression of human rights and the Khashoggi murder were central to Ruscha’s decision to quit the Desert X board, as he stated in an interview with Frances Anderton, host of DnA on KCRW, labeling the impending exhibition “the equivalent of inviting Hitler to a tea party.” Lipschutz cited reasons such as the Saudi war with Yemen and its suppression of LGBTQ rights for his resignation from the board. In addition, Desert X is a nonprofit and the outrage surrounding the Saudi exhibition caused one major donor, the MaddocksBrown Foundation, to announce cessation of its funding in protest.

The Desert X controversy is part of a rising tide of art world social consciousness. In last issue’s column, I surveyed protests in the art world to remove donor recognition rights afforded the Sackler family—who own Purdue Pharma, the major supplier of Oxycontin, source of the opioid epidemic— and other actions around dubious business ties of art mega-donors.

On Anderton’s KCRW show, Neville Wakefield, artistic director of Desert X, pushed back: “I think essentially you either believe in embargo and that you don’t communicate with people with whom you believe there are differences, or you believe in the power of art to connect people.” The Desert X message is that the Saudi installation will help build western bridges to the kingdom.

Participants in the Saudi show include Lita Albuquerque from LA, Egyptian-born Sherin Guirguis, Danish art collective Superflex and at least six Saudi artists. Albuquerque has done site-specific installations in deserts around the world, including 2017’s inaugural Desert X. She will install a mile-long sculptural work at the Saudi site.

The Saudis have taken too many steps backward since the Crown Prince assumed power, and all their art outreach and public relations can’t obscure their obscene and dismal failure to become enlightened citizens of the world. Desert X has made a major blunder. When Desert X fundraisers inevitably ask for more donations from the art community, they may find they are stranded in the desert without a drop to drink.