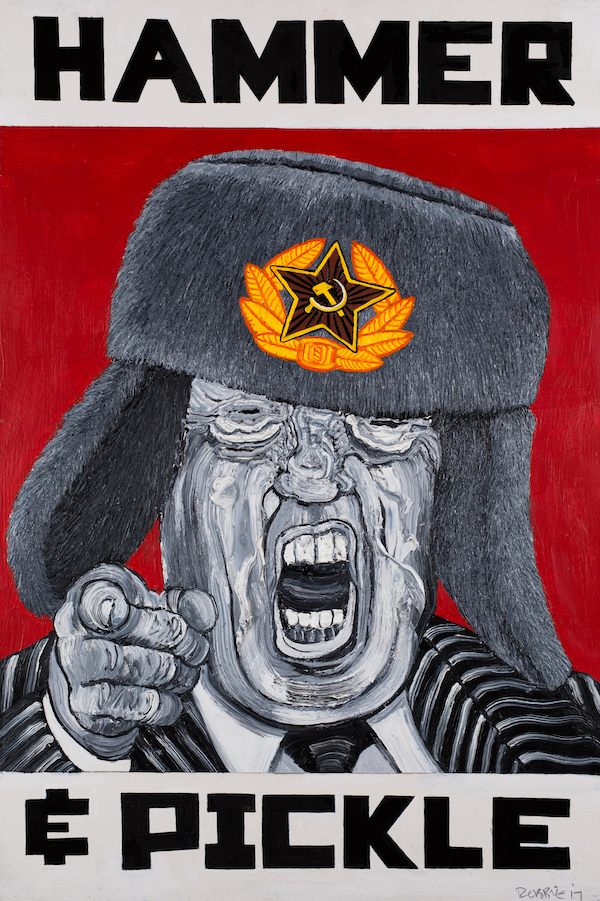 On February 15, 2019, President Donald Trump issued a fake declaration of a national emergency at the southern border of the U.S., claiming that criminals and drugs were infiltrating into the country at record levels—a blatant lie. In fact, illegal border crossings have dropped steadily for the last 20 years, and most drug smuggling is done through ports of entry, not the Texas wilderness. Presidents have used emergency declarations almost exclusively for natural disasters since 1976 when the National Emergencies Act became law. Trump made it clear that he was issuing the declaration to obtain the funds Congress wouldn’t appropriate to build his vaunted wall (that Mexico will NOT pay for), an unconstitutional use of the act that is being challenged in a lawsuit filed by 16 states.

However, the real national emergency has been the Trump presidency’s horrific corruption and lies. The Washington Post’s fact checker logged in Trump’s 7,000th public lie, by the end of 2018. There are open investigations of Trump and his companies for numerous potential crimes, including the Trump campaign’s possible conspiracy with Russia concerning the 2016 election, the Trump Organization for possible bank and insurance fraud, the Trump inaugural committee for pay-to-play fraud in soliciting funds, and the self-dealings of the Trump Foundation which was seized and shut down by the New York State Attorney General.

The art world has responded to this national crisis with a number of art shows displaying “resistance art”—skewering the president and his aides. One of the most important resistance shows took place late last year by the master of political caricaturists, LA’s Robbie Conal, who started out in the 1980s plastering horror-style portraits of President Reagan and his cabinet members on utility poles in major American cities.

Conal’s posters and paintings of presidents and their advisors are done in grayscale ghoulish likenesses. It seemed appropriate that his show at DTLA’s Track 16 Gallery featuring paintings of President Trump and more than 20 of his flunkies, “Robbie Conal’s Cabinet of Horrors,” should open just before Halloween.

As I walked into the packed gallery on opening night of the Conal show, I was shocked to see a face I recognized from cable news—Felix Sater. A convicted felon, Sater is an important figure in the Robert Mueller investigation. The Russian-born Sater was head of Bayrock, a real estate development firm that allegedly funneled Russian oligarchs’ money into Trump’s properties, especially the Trump Soho Tower in New York. According to a 2018 study written by Thomas Frank of BuzzFeed, 77% of the Trump Soho condominium buyers purchased their condos through LLCs for all cash (a possible indicator of money laundering) and most of the buyers were Russians and Ukrainians. 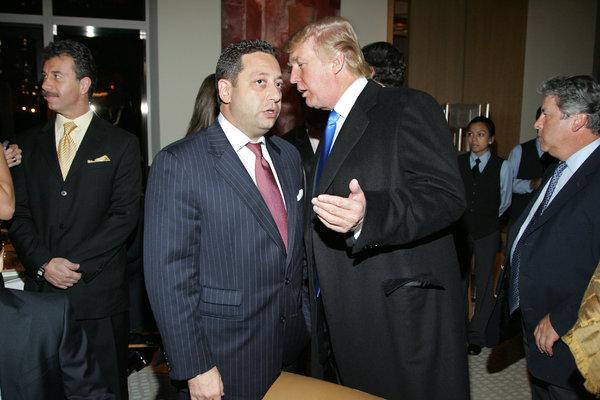 Sater, who had an office adjacent to the Trump Organization in Trump Tower, played a crucial role during the 2016 campaign when he teamed up with Trump’s fixer Michael Cohen (a friend of Sater’s since they attended the same high school) to negotiate a deal for a Trump Tower in Moscow that would bring Trump “hundreds of millions,” according to Cohen (this was going on while Trump repeatedly proclaimed he had “no business with Russia”).

At the Conal show, Sater assured me he was telling Special Counsel Mueller’s agents “absolutely everything they wanted to know” in conjunction with their investigation of the Trump campaign for possible Russian collusion. He said he has known former FBI Director Mueller “very well” for a long time (likely because, as is widely known, Sater was an FBI informant for over 20 years). 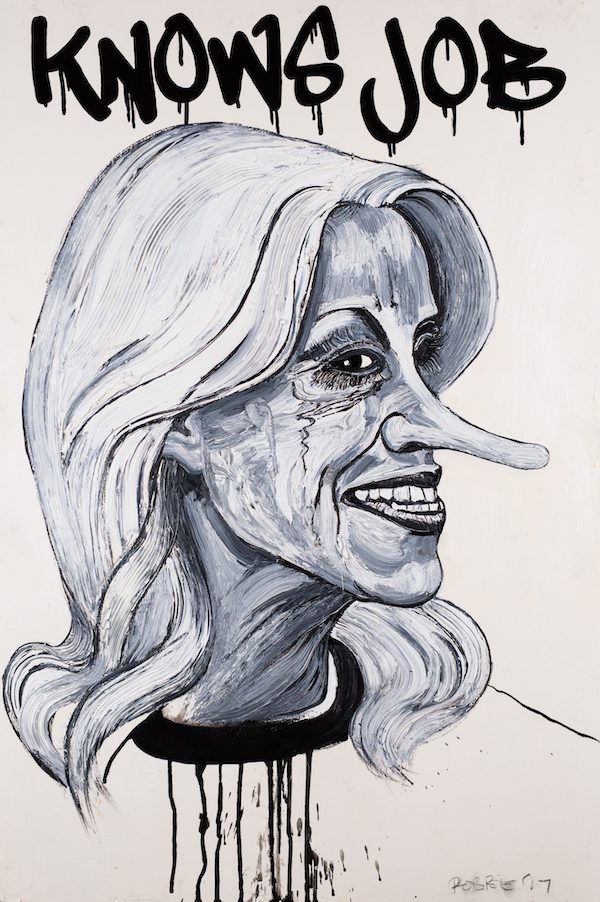 Sater, who like Cohen has turned on Trump, told me he was thinking of buying one of Conal’s caricatures of Trump, pointing to the one of Trump wearing a Russian-style fur hat complete with the Soviet red star symbol.

The Conal caricatures were all spot on. Notable was the portrait of White House mouthpiece Kellyanne Conway with an impossibly long Pinocchio nose, entitled Know Job. Trump’s television lawyer, ex-N.Y. Mayor Rudy Giuliani, was made to resemble an aged vampire mouthing, “Is It Something I Said?” Conal’s Brett Kavanaugh seemed to be based on his out-of-control performance before the Senate Judiciary Committee considering his nomination within hours of his accuser, Dr. Christine Ford, detailing his alleged sexual assault on her. In the Conal portrait, the new Supreme Court justice’s face is scrunched up with bitterness and rage. 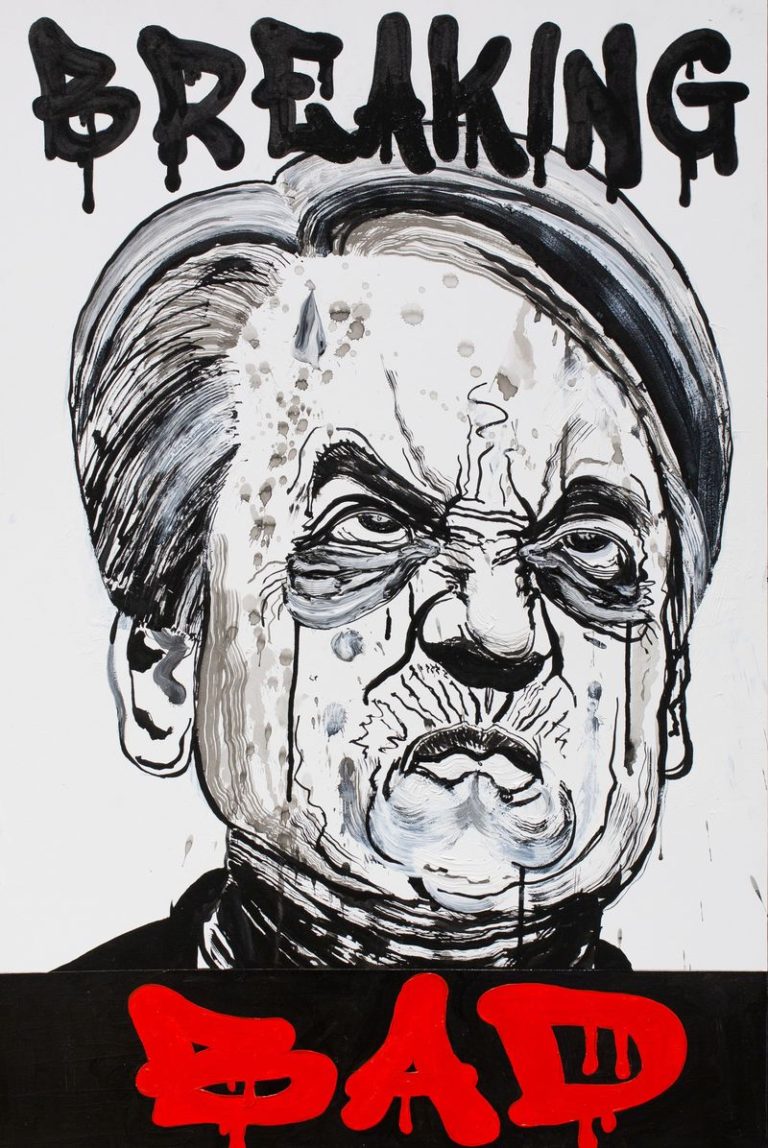 Other LA artists who have taken on Trump through their art include Shepard Fairey and Mark Bradford. An art protest group in New York City known as “HALT Action” has organized demonstrations in front of Trump- and Kushner-owned properties. The group also sponsored Marilyn Minter in her efforts to create a plaque of Trump which was reproduced as poster art. The plaque displays a small portrait of the president under which is a quote from his Access Hollywood hot-mike boast to Billy Bush which ends with the memorable line: “And when you’re a star they let you do it… ” Underneath the quotation is its attribution: “The President of the United States of America.”