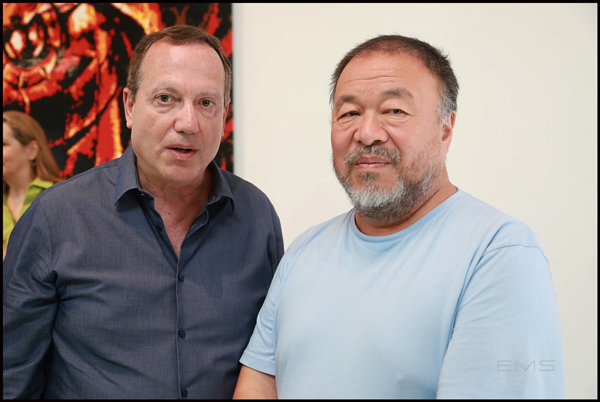 Myself with Ai Weiwei at Deitch opening, photo by Eric Minh Swenson

The first week of October was Ai Weiwei week in Los Angeles—a triple-header of shows including the Marciano Foundation, the opening show of former MOCA Director Jeffrey Deitch’s new Hollywood gallery, and at the recent UTA gallery in Beverly Hills. First stop was the Marciano Foundation. At the crowded press conference Maurice Marciano was overcome with emotion when discussing the sudden death at only 40 of his friend Josh Roth, of UTA talent agency, who had signed Ai to the agency. Marciano was so overwrought that he cut his remarks short. This sense of grief carried over to Ai, who simply uttered a couple of sentences and took no questions. 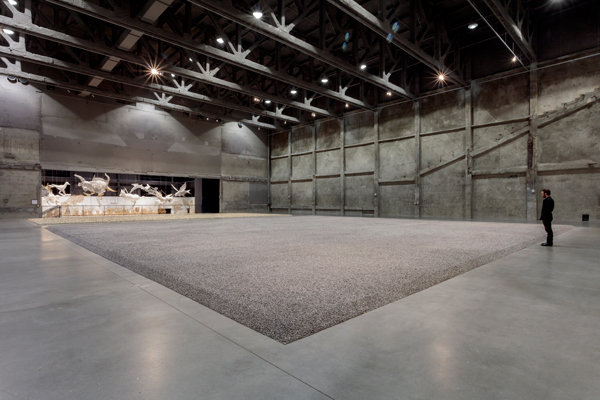 However, Ai’s work speaks for itself. The Marciano show was spectacular, beginning with a massive perfectly groomed floor box of 49 tons of hand-painted porcelain sunflower seeds made to resemble the real things.

Life Cycle, the show’s centerpiece, exhibited in the Marciano’s former Masonic theatre, features a giant-size bamboo replica of a refugee boat surrounded by mythological Chinese creatures magically suspended from the theatre’s ceiling. These beasts were hand-crafted in bamboo and silk in a Chinese provincial city with a tradition of kite-making going back hundreds of years.
A few days later, Deitch, sporting a pink suit, opened his new gallery with Ai’s show “Zodiac.” A friendly Ai posed tirelessly with adoring fans and their endless selfie requests. Deitch also hosted a private VIP dinner for Ai, attended by Frank Gehry who designed his gallery

The Deitch show featured almost 6,000 antique three-legged stools from China that Ai had salvaged from ancient traditional Chinese neighborhoods demolished to make way for high-rise apartments. The show included a ton of tea compacted into a dense large square and traditional Chinese animal head signs of the zodiac pictorially rendered in LEGO block configurations.
The third show “Cao/Humanity” (dedicated to Roth) opened five days later at a new gallery space that Ai, trained as an architect, had helped renovate in a former tool company building in Beverly Hills. Ai made good use of the relatively small space which has a bow-and-truss roof and three asymmetrical rooms. The UTA gallery was to be a showcase for the artists Josh Roth represented for the agency, and the huge opening-night crowd overwhelmed the modest space. Just who will fill the shoes of the seemingly irreplaceable Roth is unknown.

The Cao (“grass” in Chinese) show is outstanding with a tall rusted metallic tree husk looming over the centerpiece, a field of “grass” made up of 727 hexagonal pieces of marble “turf” from which the marble “grass” sprouted. The show also featured Ai’s take on 19th-century Chinese porcelain export-style bowls and plates, depicting the 2016 saga of the Syrian refugee crossing the Mediterranean to Europe. One of the plates displayed a dead refugee boy on the shoreline—an homage to the notorious photo that shocked the world. Ai controversially posed as the dead boy near the location of the tragedy in conjunction with his stunning 2017 documentary The Human Flow, which captured the recent Syrian and African diasporas in all of their horrors. 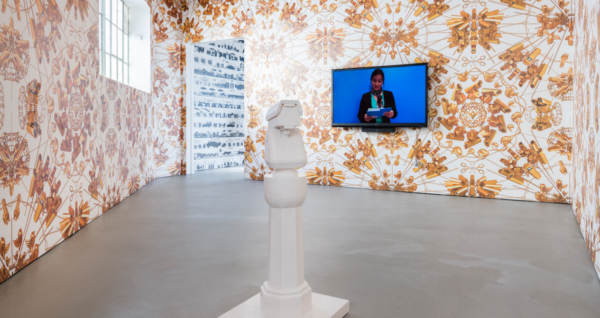 Ai Weiwei has been one of the most famous artists in the world for years—his fame skyrocketing with his stunning design for the “bird’s nest” stadium built for the 2008 Olympics in Bejing. The Ai adoration was a long-time coming to Los Angeles.

Ai is easily entitled to identify with the refugees who suffuse so much of his current work since he now lives in exile himself in Berlin, having been banned from China after its government destroyed his massive studio complex in Shanghai.

There is little question that Ai is the most important conceptual artist in the world and one of its most vital political dissidents as well. But having come to Hollywood at long last and coming under the wing of a talent agency, the question remains as to whether this town will corrupt or taint him as it has countless other creative souls, or whether Ai will maintain focus on his core convictions—a steely dissent from the forces of authoritarianism now sweeping the globe, including right here in America.